Home » How I Make $3000 Per Month Passive Income With Blogging

Would you like to make $3,000 a month without a nine to five job, without investing in the stock market or without owning any properties? Interested? Keep on reading!

But first, what exactly is passive income? Passive income is essentially leveraged income that takes little to no effort to maintain and grow once it’s already in place.

So let’s say that you work for 20 hours a week. You get paid for those 20 hours. If you don’t work, you don’t get paid, and that’s how active income works.

Passive income on the other hand works even when you’re not actively working, and that is why it is called passive income.

So how does this whole passive income thing work? Now, I want to make one thing clear, and that is that passive income is not free money. It does not grow on trees and does not fall from the sky.

There is no such thing as free money. There are only two ways in which you can make passive income. The first way to make passive income is by investing in money. So you’ve put in the money first and then you make money from that later on, such as for example, if you invest in the stock market or if you own a property.

The reason why passive income is so alluring is because not only does it give you financial freedom, but it also gives you time freedom, which means not being tied to a job when it comes to creating wealth or just paying for your living expenses.

Besides the financial freedom and the freedom of time, what I believe passive income gives you is peace of mind.

Now, if you have just one source of income, which is an active source of income, such as a job, you could get fired tomorrow, your company might crash overnight, or you could have an unforeseen health problem, which causes issues for you when it comes to working full time.

You can continue to keep an active source of income and build on extra sources of income, which are more passive in nature. So that if something were to happen to your active job, you would still have some backup or emergency cash.

Now, another thing that I want to mention about passive income is that it is not easy and it does not happen overnight, especially if you choose the time route. Of course, if you have the money to invest in the stock market or in real estate, then you can go ahead and start reaping the benefits pretty soon.

If you choose the path where you actually invest the time upfront and then reap the benefits later, you do need to be consistently putting in time and effort into growing your passive income sources.

Now that brings me to my passive income story and how I make passive income online without investing in stocks or in real estate. To be honest, I knew nothing about passive income up until two years ago when I was running a hobby blog and was looking for ways to actually grow that blog.

That’s when I came across some income reports from bloggers and online entrepreneurs who were doing really cool things and were making passive income from various sources and that got me hooked. So I started a second blog in the travel and lifestyle space to see if I could actually make some passive income from it over the years.

Fast forward two years, and now I am a full time blogger and online entrepreneur, which is something that I never thought would be happening in this way. That brings me to the next question, which is how much passive income do I make every month?

Now you’ve probably seen on YouTube, lots of creators that monetize with ads and each time that someone views an ad, the YouTube creator makes a little bit of money. The same thing is true for bloggers as well. So I’ve partnered on my lifestyle blog with Mediavine, which is a premium ad network.

That basically runs ads on every time a visitor visits my blog. So you can see ads either in between the content or you can also see ads in the sidebar, or maybe even video ads, which pop up on your screen. So for every 1000 visitors that my blog gets, I tend to make anywhere between $10 to $20 on those page views, depending on what they viewed and whether or not they clicked on any of the ads.

Now, ad revenue for me can fluctuate anywhere between $700 a month to $1,500 a month, depending on how much traffic I received, where the traffic was coming from, and what season of the year, it was.

Now, affiliate marketing, essentially when you promote a company’s product or services and they in turn give you a commission each time someone makes a sale from your recommendation. Now in the past I’ve tried my hand at a lot of different affiliate channels, and I have to say that I have a few favorites that outperform the rest.

Now, the number one platform that I like to use a lot is called ShareASale, where you can find advertisers in different categories and you can really pick and choose the kinds of products and services that you would like to promote. I also make commission on my website, hosting companies, such as HostGator, which is actually gives me a special discount for all of my referrals.

Each one of my reference actually buys through my link, I also make a small commission on that. Now, affiliate income doesn’t mean yeah, a lot of money because I’ve never had a huge focus on it. However, it still brings in anywhere between 200 to $400, depending on the amount of traffic and conversions that I get in that particular month.

The way that I make passive income selling digital products is through templates as well as digital courses, which essentially teach other creators and entrepreneurs how to grow their brand and business using social media. Now, I don’t want this video to just be about me without actually giving you useful information on how you can do the same thing for yourself.

All of which are different search engines, which essentially will make your content discoverable. Now, what I mean, my search engine is that you should have either a website, which is discoverable on Google or on Pinterest, or you should be having a channel like this on YouTube, which can be done discovered on YouTube search.

The reason why you need your content to be on a search engine is because if it cannot be discovered by a wide audience, it cannot really be monetized. The second thing that you actually need to make money on this content is a monetization strategy. So whether you implement ads on your website, or you have affiliate marketing going on, or you sell your own products, it doesn’t matter, at the end of the day, if you have some kind of content platform and you pick a monetization strategy, you can in the long run, make passive income from that.

To sum it up, you need three things to be making passive income online today. One, you need content, which is discoverable on a search engine. Two, you need an actual monetization strategy. Three, you need traffic to actually convert any of these streams into income.

Shruti is an MBA turned lifestyle entrepreneur. Before she became a full-time entrepreneur at 28, she lived in three different countries and helped scale multi-million$ startups. She has been featured in Yahoo Finance, Thrive Global, Matador Network, Medium and more. Her mission is to help aspiring entrepreneurs become profitable CEO's leveraging the power of Pinterest. When she isn't on her desktop, she's exploring new places, working on spiritual development or binge-watching her favourite shows. 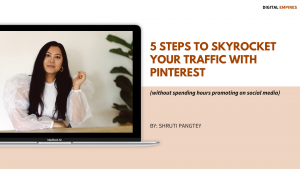 LISTEN TO THE PODCAST